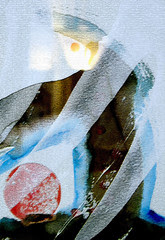 Almost an Angel
Originally uploaded by Seeking Tao
Thought I'd try experimenting with photographs of my paintings - in this instance a detail of "Crunch Bird."

Available as a print on watercolor paper.
Posted by Pat Bralley at 2:31 PM No comments: 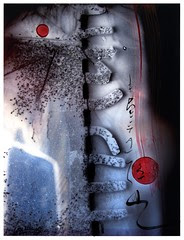 Spinal Tap
Originally uploaded by Seeking Tao
Photograph and Ink. Approximately 8 X 10.
Posted by Pat Bralley at 9:08 AM No comments: 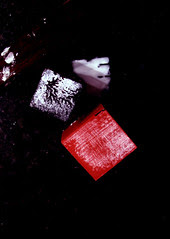 This is a picture from the kitchen counter.

It may be the better creative effort.

Posted by Pat Bralley at 4:10 PM No comments: 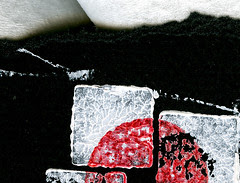 Black, White, and Red
Originally uploaded by Seeking Tao
Trying something a little new for me. We'll see how this develops.
Posted by Pat Bralley at 4:07 PM No comments: 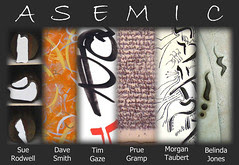 Tim Gaze is publishing a new journal called Asemic Movement. He was kind enough to include some of my work in Volume 1. However, personally, I have enjoyed the content of Voulme 2 more. It shows the asemic works of six artists as show cased at the Hahndorf Academy in Australia.

Follow this link to Vugg Books, scroll down to Tim Gaze and click on Asemic Movement, volume 1 or volume 2. They are large PDFs and take awhile to download.

I have tried to find a link just to intoduce Tim, but have failed. I did come up with an interview he did which involves poetry and calligraphy. So that will have to do.

Shadows Cast by the Moon 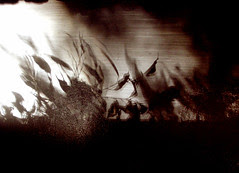 Enlightenment is like the moon reflected on the water.
The moon does not get wet, nor is the water broken.
Dōgen

But, I live in the South and in the winter it is the sun that shines bright yet coldly.
As I watch the magnolia shadows play upon the porcelin of my bathtub and tiles,
it’s as if I can feel Silence stirring,
feel the pressure of a shadow.

My intellect whispers to me, “You can’t,”
even as my senses insist, “Oh!”
The argument is settled as I recall the words,
“the moon does not get wet, nor the water broken.”

Joan Relke, an artist in Australia, recently wrote to me about Lady Li of Shu (Sichuan). Lady Li is credited with creating the tradition of bamdoo brush painting by tracing on her paper window with a brush the shadows cast by the moon and bamboo.

Or, as described in the 17th century poem, Painting Bamboo:

New bamboo has emerged from the low hedge;
Tall and erect, it seems spun from kingfisher feather.
When a shining moon rises over the east porch,
Traceries of bamboo shadow cover the ground.
I run pineblack on a bronze inkstone
And wet the brush to capture its inner meaning.
For unspoiled modesty it is by all means admirable,
But I love most its resolve: to be steadfast, faithful.

Women Writers of Traditional China: An Anthology of Poetry and Criticism p.410 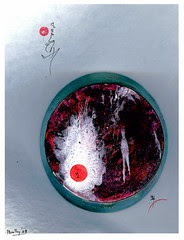 It's a new year and new resolution on trying to keep this gallery up to date.

$115 includes shipping. Write me for details.

Pat Bralley
Decatur, Georgia, United States
I spent over 25 years doing science: molecular genetics, PhD level lab work, publishing results. I’ve spent over 50 years meditating: walking the mystical, mythical paths, another form of research. I worked hard to call myself “scientist.” My friends tend to call me an “artist.” Oh, well. “Seeing for Myself” reflects both these paths of exploration. As scientist I want to see things for myself. As mystic I never forget the search for my true Self. Putting my discoveries into both art and essays clarifies my understanding. I hope others might also find something of benefit here.